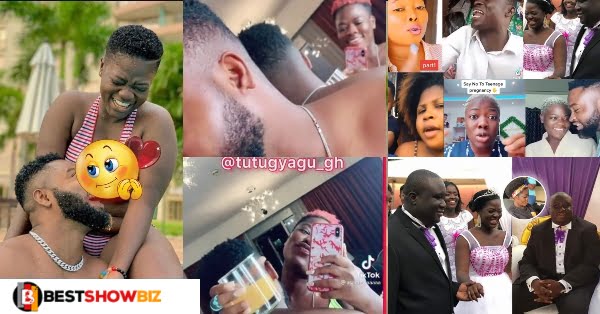 There have been rumors that Asantewaa, a prominent Tiktok singer, is having an affair with Jeffrey Obiri Boahen, behind her husband.

It has been reported that Asantewaa is having adulterous relationships with her manager, Cashious, according to the infamous Instagram site Tutugyagugh.

The rumors started after Asantewaa’s manager surprised her with a new automobile after she reached a million followers on Tiktok.

In addition to videos and images of Asantewaa in an embarrassing pool posture with her manager, other sources fanned the rumors. The fact that Asantewa’s manager had tattooed her name on his breast, demonstrating his deep affection for her, was also disclosed.

In a video that has since gone viral on social media, an unnamed man claiming to be Asantewaa’s brother humorously revealed that Asantewaa’s husband has supposedly left Asantewaa and now the manager is taking care of her.

Some social media users have expressed indignation and anxiety as a result of their actions on the platform.