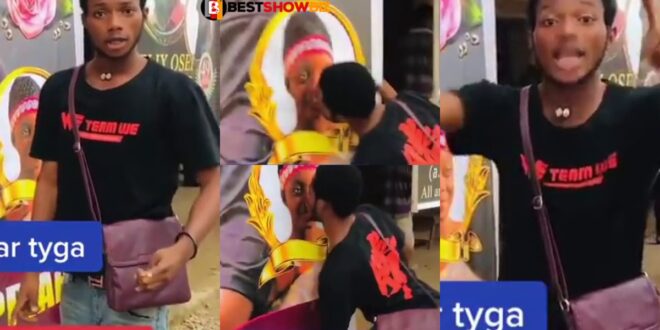 “She didn’t accept my proposal when she was alive”- Man spotted kissing obituary poster of a lady explains why he did that.

A young man’s heart has been devastated by the abrupt death of a 21-year-old young woman whom he had been trying to persuade to accept his proposal while she was still alive.

According to this gentleman, he had attempted unsuccessfully for three years to persuade the lady to begin an intimate connection with him.

In response to the lady’s death, this gentleman went to one of the obituaries and began kissing the deceased lady’s portrait on the lips.

According to his explanation, the only chance he had was to kiss her poster because she had died without saying yes to his proposal. He turned to the obituary poster and kissed it with all the force he had left in him.

He was equally saddened by the news of the beautiful damsel’s death. However, he believed that kissing her obituary images was the only way he could get personal with the woman after she died.