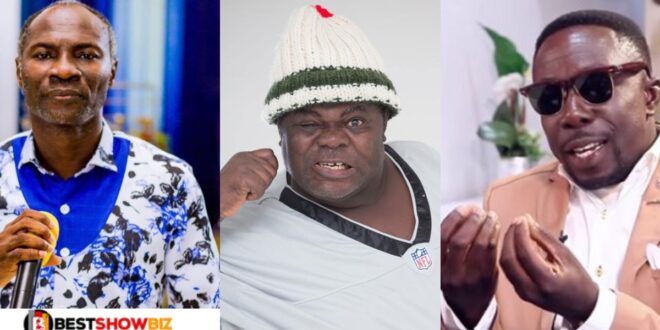 ‘He spent all the money Prophet Badu Kobi gave him to build his own house’ – Mr. Beautiful exposes T.T

Just as the plights and harsh living conditions of some veteran actors and actresses are taking center stage of the country’s entertainment discussion, with the most recent example being the spotlight being placed on the bizarre state of Psalm Adjeteyfio, better known as T.T of the Taxi Driver TV series back in the 1990s.

His condition elicited strong feelings from Ghanaians, drawing the attention of Vice-President Dr. Bawumia, who made a generous gesture to T.T a few weeks ago, easing his financial burden by arranging for his rent and upkeep for at least the next five years.

But, in an interview with Sammy Kay on the Go online show, Mr. Beautiful revealed that he is not saddened by T.T’s situation because three years ago, he was at the Glorious Wave Church, and luckily for him, Prophet Badu-Kobi personally gave him a substantial sum of money with additional funds raised in the church when he (T.T) told the man of God he had a place at Dodowa he wants to develop and stay

Mr. Beautiful claims that the money given to T.T at the church at the time could have paid for a two-bedroom apartment, only for him to come back on television crying for help after the generous gesture.

Mr. Beautiful went on to sarcastically say that when you saw T.T eating, you will be shocked by the amount of meat on his food, therefore he couldn’t sympathize with him, even though he had been offered help multiple times, unlike other veteran actors and actresses.