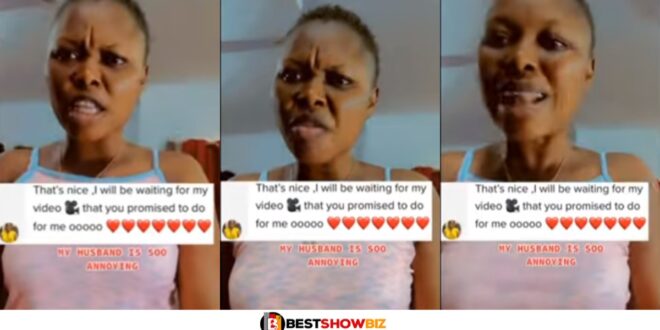 There is a saying that life is unfair and that sometimes some people have what they do not want while someone else desperately wants it. A viral social media video depicts the type of woman that many Ghanaian men say they want in a wife.

The video depicts a wife who was allegedly in the mood for lovemaking and thus piled on top of her husband, demanding that he cave so she could sleep with him. The husband made a variety of excuses, including being sick and fasting.

The hilarious wife, on the other hand, would not take no for an answer. She clapped back at the husband, saying that the lovemaking would heal him. She was angry at her husband for not sleeping in the bedroom on a regular basis and thus declared that she had had enough.

Read Also  DJ Switch has been robbed, breaks down as she begs thieves

The husband then mentioned that it was a Sunday and asked if she had gone to church. She retorted once more, saying she is married, so whatever she does in the bedroom is sanctioned by the pastor.