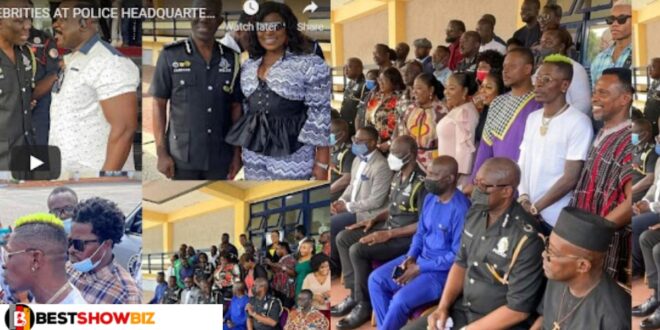 Ghana Police finally release statement explaining why IGP invited celebrities for a meeting and what went on.

The Ghana Police Service has released an official statement just a few hours ago, detailing the events that transpired between the police, led by Inspector General of Police Dampare, and members of the creative arts industry on Wednesday, November 10, 2021.

Over 130 players of the creative arts industry met with the leadership of the Ghana Police Service at the Police Headquarters, Wednesday, 10th November, 2021.

The players came from various sectors of the industry and it included musicians, actors, producers, bloggers, poets, comedians and dancers as well as representatives of the various associations and recognized groups within the industry.

The meeting which was moderated by Mr Abeiku Aggrey Santana was called by the Inspector-General of Police Dr. George Akuffo Dampare to provide a platform for the creatives to openly discuss security issues affecting their industry.

Discussions focused on matters such as; piracy of creative works, provision of event security, access to police uniforms and premises for productions, a dedicated Police Unit to facilitate activities of industry players and the unprofessional conduct exhibited by some police officers.

The dialogue also focused on the enforcement of copyright laws, defamatory publications on social media and the need for an enhanced partnership between the Police and the Creative Arts Industry for public education on law enforcement.

The Inspector-General of Police (IGP), Dr. George Akuffo Dampare and some members of the Police Management Board (POMAB) took turns to address some of the issues raised. The IGP noted the significant contribution of the creative arts industry to the socio-economic development of the country.

He gave the assurance that the Ghana Police Service was determined to provide a safe and disciplined environment for the creative arts to thrive.

He added that all concerns raised had been taken in good faith and it would inform the formulation of strategies aimed at providing a conducive environment for all Ghanaians.

The Police Administration for the first time assigned liaison officers to collaborate with the leadership of the various groups within the creative space for future engagements.

The Police Administration wishes to thank the various groups and associations for overwhelmingly responding to the invitation and also for their contribution to the lively engagement session.

We look forward to a better and stronger partnership.