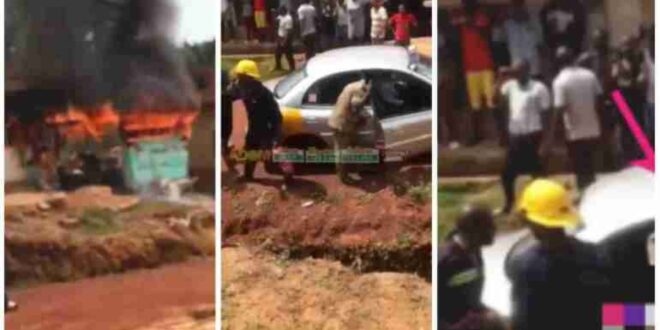 A video of firefighters arriving at a fire site in a taxi with just fire extinguishers to put out the flames has gone viral.

The arrival of fire service officers at a location where a fire has engulfed two apartments with no water has sparked outrage online.

An electrical malfunction caused a house to catch fire at Akyem Begoro, ER. To put out the fire, fire department personnel arrived in a taxi.

Fire Service Officers were seen in a video coming at a location where a fire had engulfed two units, devastating the property.

They arrived in a commercial taxi and Okada (Commercial Motorcycle) , with their ABC extinguisher to put out the fire.

Read Also  Xandy Kamel ignored by most Nana Ama Mcbrown, Emelia Brobbey, and others on her wedding