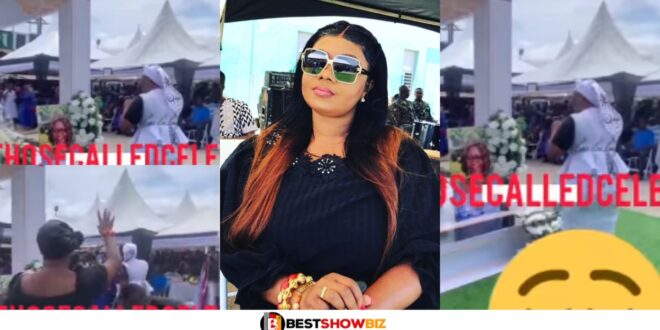 Empress Gifty may be seen in a video that has gone viral on social media snubbing an elderly woman who attempted to console her at a time when she was on the verge of breaking down at the funeral of her relative.

While she was singing at the funeral, Empress Gifty all of a sudden began jumping about and shouting like a crazy person.

An elderly woman approached her out of concern for her safety, patted her on the shoulder, and offered to assist her in pulling herself together, but the attempt was unsuccessful.

The gospel musician was so angry that she hurled her hand at the elderly woman without even turning to see who it was. The elderly woman was in danger of falling due to the carelessness of the young woman.

Empress Gifty made the sad announcement on social media around a month ago that her grandma had passed away.

The gospel performer, who was obviously struggling emotionally, shared the news with her audience and then proceeded to partake in her routine social media activities after gathering herself together.

However, after a week had passed, Empress Gifty was saddened to learn that another member of her family had passed away; this time, it was her older sister.

She has been dealing with the agony by keeping her silence up until this past weekend, when she was forced to say goodbye to them.