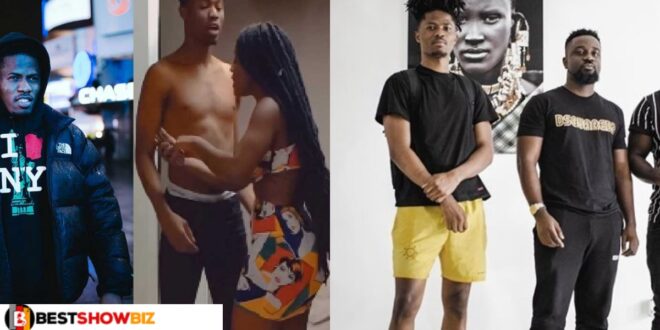 Efia Odo, an actress, and video vixen criticized Sarkodie for claiming to be Kwesi Arthur’s biggest fan in a tweet he wrote on the microblogging platform.

In the post that sparked all of Efia Odo’s temper tantrums, Sarkodie declared that he’s a Kwesi Arthur fan and arguably the number one on the “Ground Up” honcho’s list.

Efia Odo, who is known for championing anything Kwesi Arthur on her many social media pages, did not take Sarkodie’s bragging rights lightly.

She also took to Twitter to dismiss and mock Sarkodie’s claims of being a fan of Kwesi Arthur, claiming that she has no comparison when it comes to fan-love for Kwesi Arthur.

“I heard Sarkodie said he’s the biggest Kwesi Arthur fan,  I giggled,”   (In Beyonce’s voice) “You must not know bout me” Efia Odo tweeted

These tweets from Sarkodie and Efia Odo elicited a varied reaction on the bird app, as well as opposing perspectives from tweeps.

Some social media critics believe Efia Odo should have ignored Sarkodie’s non-toxic post regarding Kwesi Arthur since her retort was unnecessary.

Others have suggested that Sarkodie should not have tweeted at all because Efia Odo plainly supports Kwesi Arthur more than him.

Check out the tweets below to learn more…