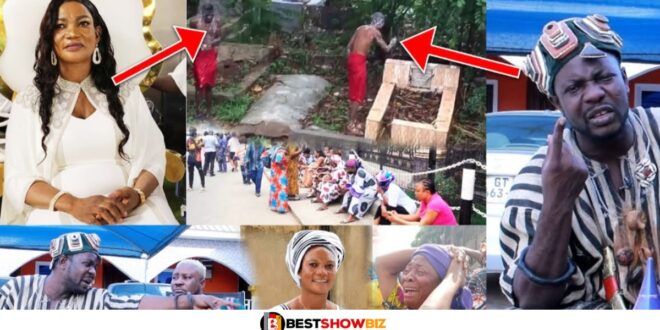 I Bathed Prophetess Dankwa At The Cemetery – Mallam reveals (video)

Prophetess Dankwa, the founder and head of King Solomon Universal Church, is in serious trouble after being revealed by a major priest who claims to be her spiritual Father.

In an exclusive interview, the head priest, whose identity is concealed, revealed every single secret about what the Prophetess does behind closed doors, as well as the Prophetess’s negative side, and how she built such a large church.

The head priest said that the Prophetess is not from God and that he is the reason for her church’s prosperity. He claims to have planted deities beneath her church structure. He also stated that he washed the Prophetess naked in the grave, with the husband as a witness.

When questioned why he bathed the Prophetess, he revealed a hidden secret: that it was a spiritual impartation and that he was summoning his spiritual gods to aid her to prosper in her ministry.

He went on to say that he has obtained a series of recordings as proof to back up his allegations and that if the Prophetess comes out to refute it, he would disclose the entire video to the world.