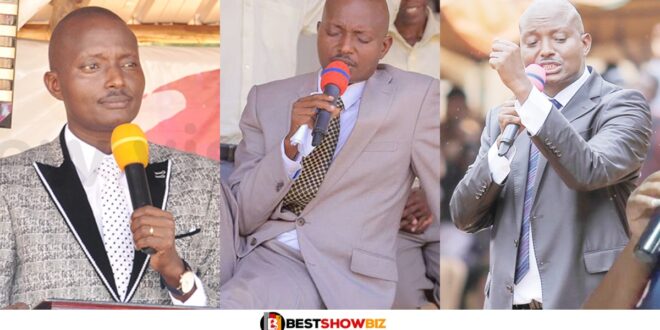 “do you know where i am from? try me if you want to die.” Pastor threatens his haters. (video)

House of Prayer Ministries church pastor Aloysius Bugingo has faced a barrage of criticism from Ugandans since he made public his connection with his mistress, Susan Makula.

The hatred, however, grew lately after he was presented to Susan’s parents during a Kukyala ceremony.

Many Ugandans, including his fellow Pastors Ssempa and Ssenyonga, chose to speak out about his marriage.

The latter believes that Bugingo’s actions are wrong and that Makula is a prostitute.

A Ugandan nkuba kyeyo known as Senga Acid also exposed the preacher in a series of internet writings.

Senga stated that Bugingo had cheated not just on his first wife Teddy Naluswa, but also on Makula with a number of women.

The revelations included how he slept with a female radio broadcaster, bought her a vehicle, and then returned it due to a misunderstanding. She also stated that he missed Teddy’s mother’s funeral because he was in the office getting a blow job from Susan.

Throughout the Revelations, Bugingo has delivered warnings that no one fights him and succeeds in life.

According to the pastor, everyone who has criticized him has had a poor outcome, with some being demoted at work, sacked from offices, and expelled from Parliament.

“I’m warning you: I have a list of 50 people who have publicly suffered as a result of their fights with me.” If you’re at a loss for what to do, don’t start bashing Bugingo; you have no idea where I came from. “As long as I’m still living, I’d rather accept and suffer a natural death than a quick one due of Bugingo,” he stated during a church session.

“Whoever says it’s simply a threat, assault me now and see what happens.” Some of these individuals are even preachers, ” he noted.