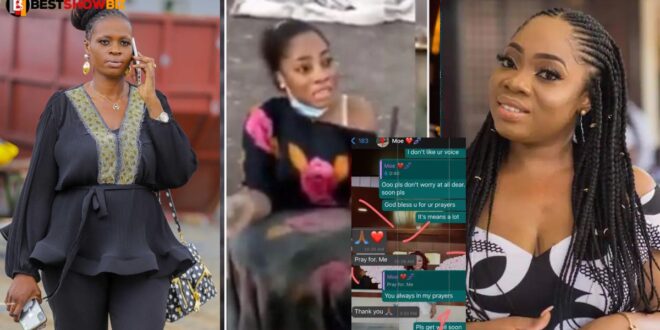 Ayisha Modi took to social media to share a recent Whatsapp conversation she had with actress and Instagram model Moesha Boduong.

The discussions indicate that Moesha Boduong is healing from whatever ailment she has and is capable of conversing.

Moesha recently said that she had seen Jesus Christ and had become a born-again Christian as a result of her encounter.

Not long later, she was caught on camera in a viral video confessing about her former life and how she wanted to end it all.

Moesha also said that she had sold all of her cars and homes and was now relying on taxis and ride-hailing services to get around.

Moesha later sold her possessions to contribute to the church that helped her repent, according to social media reports.

According to the claims that went viral, the church had brought Moesha to a secret location.

This prompted Ayisha Modi to go online and issue a warning to the church, stating that if Moesha was not released within 24 hours, she would face her wrath.

Modi shared the talks with Moesha not long after she made her threats. Moesha said she was “healed in the mighty name of Jesus.” throughout the discussion. She also requested that Modi prays for her recovery.