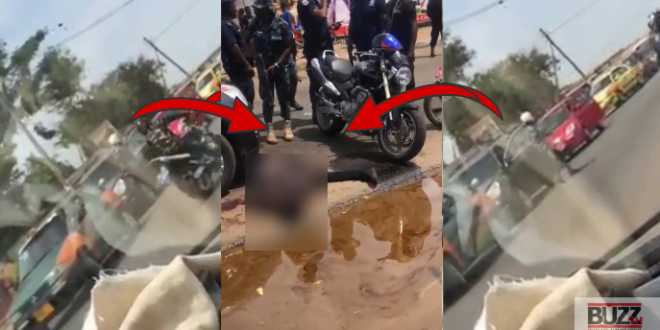 Daylight Robbery In Tema: One Of The Armed Robbers Shot Dead – Videos

Two armed robbers went for an operation in a broad daylight in Tema TDC road which videos of the scene have fast gone viral.

according to reports, these two gunmen attacked a Chinese man who is believed to be a businessman in the traffic.

from reports as we sighted, the Chinees businessman and his co-worker who is a Ghanaian went to the bank and redrawn a huge amount of money.

from the videos as we sighted, one of the gunmen was seen on the motor whiles the other was seen holding the gate of the car as the sound of a gunshot was heard.

one of them was shot dead according to reports and from the video as we sighted.

as they were in traffic, all the cars around stopped and watch them as some filmed the scene when they went viral.

watch the videos below;