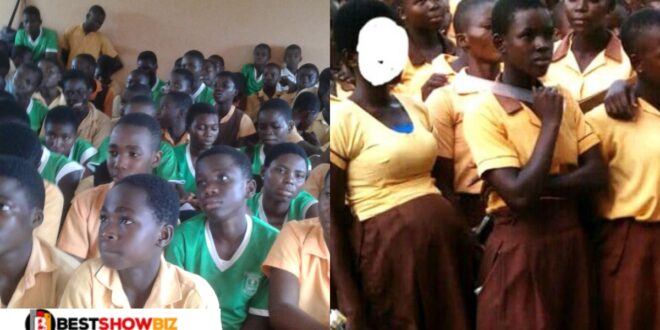 A troubling trend is looming over Ajumako Kokoben D/A Basic School in the Central Region.

According to the report, male students are impregnating their female classmates at an alarming rate, raising serious concerns about the children’s and unborn children’s futures.

This was brought to light by the school’s Girl Child Coordinator, Alberta Enyonam, during activities to mark Girls Week in the school, which was themed “Preventing Teenage Pregnancy in Ajumako Kokoben Basic D/A Basic School” and coincided with the celebration of International Girls Day.

Female students are being impregnated by their male classmates, according to the principal, and this is having a negative impact on academic performance.

“The theme really goes for us because teenage pregnancy has become the norm of the day in Ajumako Kokoben Basic D/A Basic School here. The girls are really getting pregnant here and the most unfortunate thing is that they get pregnant with their own classmates which is very bad.

It creates a burden on their parents, it means that their parents will have to take care of these kids too which is really disturbing. Some also end up dropping out, when you ask them to come back to school they think they are mature. Currently, we have some mothers and two pregnant girls in the school,  she told Kasapa FM in an interview.”