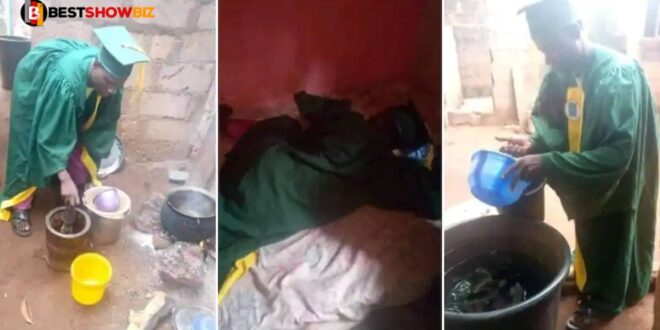 Many people have been discussing a university student who opposed the excessive expense of acquiring gowns for matriculation ceremonies in colleges.

In images published in the Igbo Rant HQ Facebook group, the unnamed student attempted to misuse the garment material.

He wore it while cooking meals and even when he went to bed. According to Famousblogng, the young man rented the gown for $5,000.

According to reports, the disgruntled student said that something hired for $5,000 could not be returned the same day.

below are some comments;

@dundunempire commented: “Before…. i paid for 5k gown and they said gown has finished…”

@chinenye_nwa1 said: “Get ready for damages if you don’t return it in good shape when it was given to you.”

@mabelblac_ questioned: “Is it not the school that will give you gown which one is rent again.”

@official_tashaeben remarked: “Nna flex ya 5k, if I see that 5k sef gan I don blow.”