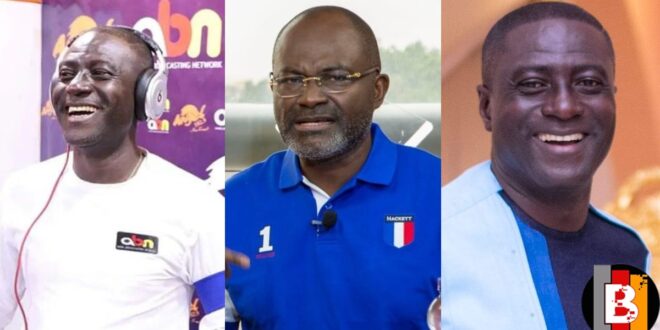 Captain Smart, a broadcaster, has finally responded to Hon Kennedy Agyapong’s claim that he owes him GH10,000.

Remember that the Member of Parliament for Assin Central claimed that Captain Smart borrowed from him some air conditions valued GH 10,000, but he has yet to pay him the money.

Kennedy Agyapong said that the outspoken radio broadcaster had owed him the money for three years.

Captain Smart responded to the allegation in an interview with Kingdom Plus FM, saying that Kennedy Agyapong’s allegations against him are baseless.

He went on to say that the claim was made to discredit him, and that people who fed Kennedy Agyapong “those” details were foolish.

“All of Kennedy Agyapong’s allegations about me are false, and he is attempting to discredit me. people who provide him with ‘those’ details are foolish.” Captain Smart told Fiifi Pratt.

Captain Smart stated that he is prepared to battle and is unconcerned about the attacks directed at him.

For further details, see the video below: