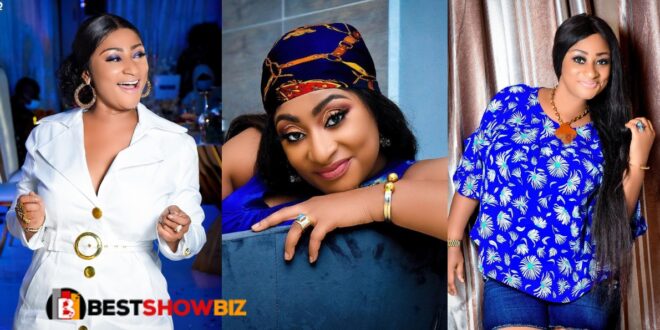 Secret of how Ellen White became an actress: Details + Photos

Ellen Kyei White is a well-known Ghanaian actress who debuted in 2014 and has since starred in a number of Ghanaian films.

On September 30th, she was born (year unknown). Ellen White is a mother of one.

After finishing her basic school at the Adventist Primary School, Ellen White attended the Adventist Day Senior High School in Suame for her senior education.

Ellen’s first film part occurred unexpectedly while she was taken on an errand in Adum, Kumasi (after graduating from senior high school).

A film director named Jackson K. Bentum, according to Ellen, recognized something extraordinary in her and told her he wanted to bring it to light.

Read Also  "Work and get money, Only Poor people say the world is vanity"- Fella Makafui

She had no idea what that “something” was, but it turned out to be acting, and she was cast in the film Okukuseku as Santo’s girlfriend.

After her normal bus failed to come after 2 hours, she chose to return to her country after being battered by the snow while working at a grocery store in London.

Her return to Ghana was greeted by the same director, Jackson Bentum, who had introduced her to the film business, and there has been no looking back for the star actress, who has lost count of the number of films she has been in.