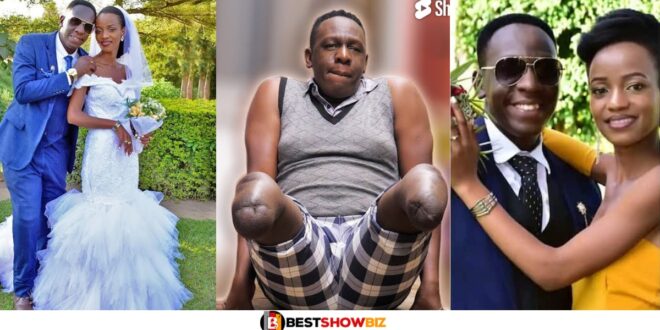 Beautiful Lady Finds Out After Wedding That Her Husband Has No Legs, Shocking Video Surfaces

A man named Jado allegedly concealed an important aspect of his personality from his fiancee and kept it hidden until they married.

He lost his legs as a child due to a bomb explosion. According to the viral story, the man is paralyzed on both legs due to amputation.

But he didn’t tell his fiancee, Borah, that he walked on artificial legs until they married.

Borah discovered the truth after their wedding because the man could no longer hide it.

Jado explained why he kept the truth from his woman by saying he was afraid the love of his life would abandon him if he let the cat out of the bag.

Read Also  ‘I need to put my [email protected]!na in the fridge since no one is eating it’ – Lady cries

He stated that he was terrified of being rejected by Borah. Even after learning the whole truth after their wedding, the girl has refused to leave her husband because she still loves him.