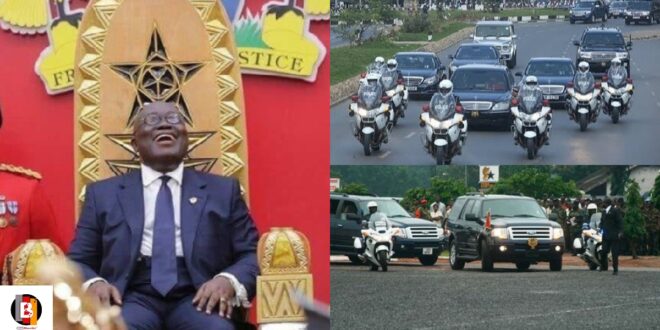 Akufo-Addo has a separate V8 car which he uses to carry the presidential chair when he goes on tour.

Allegations by Gordon Edudzi Tameklo, a member of the NDC’s communications staff has it that President Akufo-Addo travels with his presidential chair in the back of a Toyota V8 vehicle.

To him, Rhe NDC man, who made the remark on Thursday, January 6, The Ghana President’s expensive journeys across the world are an unnecessary waste of money at a time when workers in the country are struggling to make ends meet.

While on 3FM’s Sunrise show with host Alfred Ocansey, he said, “The most ridiculous thing I found out later is that the President currently has a separate Tundra or V8 that carries his chair.”

Read Also  "i am more handsome than patapaa - lilwin claims

“When Justice Marfo Sau died, I went to the funeral service at the State House, I was shocked, I wanted to be sure, and so I saw it myself,” he explained.

“The president was in Tamale a few weeks ago for the 70th anniversary of Tamale Secondary School, the same Tundra that carried the chair from Tamale to Accra.” When you do this, it becomes difficult to rally citizens around a burden-sharing conversation.”

Ghana’s economy: The most ridiculous thing I even found out later is that as we speak today; in the President’s convoy he has a separate Tundra or V8 that carries his chair.