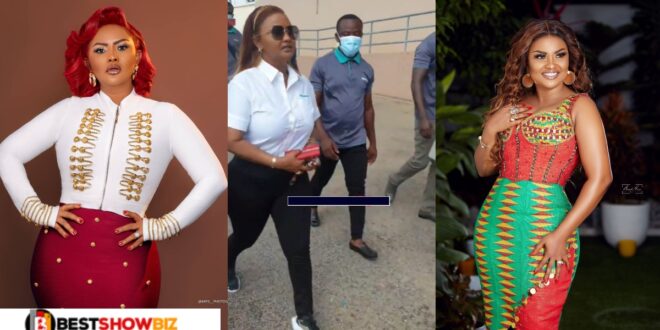 Aden! Aden a! – Nana Ama Mcbrown shouts on fans who begged her for money (Video)

Nana Ama McBrown, an actress, was not in the mood for nonsense on Sunday, as she rudely yelled at a fan who was begging for money.

The host of ‘United Showbiz’ has returned to work after taking time off to recover from her most recent hand surgery as well as go on vacation.

On Saturday, she returned to work, hosting an emotional show with Nana Aba Anamoah and Abena Korkor.

She then had an official assignment at the Baba Yara Sports Stadium on Sunday.

McBrown made an appearance during Kumasi Asante Kotoko’s match against Bechem United.

When she arrived at the event, she found herself in trouble because of the way she reacted to some of the fans.

While walking to the stadium, McBrown was approached by some fans who appeared to be begging for money.

That did not sit well with the actress, who turned around and yelled at the man.

‘Aden! Aden!’ She exclaimed twice, perplexed as to why she was being bothered in this way.

She went on to say that she is there for a reason and is not looking forward to being bothered by fans.