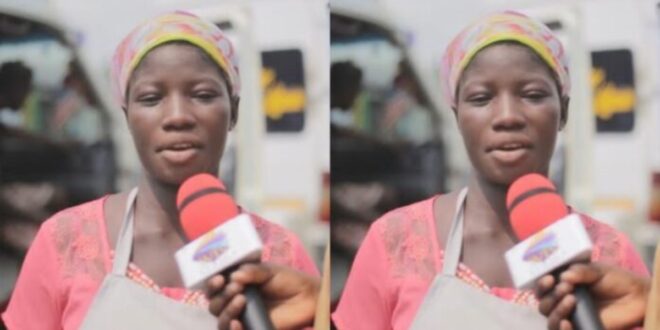 A Ghanaian lady identified as Efata Ametorworglo, an ‘Asaana’ seller, has expressed her plight with SVTV Africa on how her mother treated her over the past few weeks.

Speaking to Ayisha Bayipa, Efata says that her mother told her she hated her while her brother called her sick.

According to Efata, her mother destroyed her friendship with her partner by informing her coworkers that she was pregnant for three months.

“My mother just doesn’t like me. She lied to my colleagues at the market place that I was 3 months pregnant when it was just a month old.
My colleagues also called my boyfriend and told him about it.

Now, he doesn’t pick my calls anymore because he thinks it’s someone else’s child. Even after I confirmed at the hospital, he still wouldn’t listen. My unborn twins won’t know their father because of what my mother did,”

She continued that she actually has no place to stay with her 3-year-old son. In addition, she also helps her mother pay off her debts, because she doesn’t have money to take care of herself.