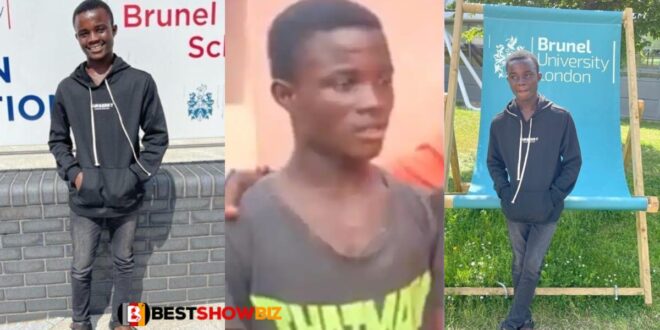 Thomas Amoani, a 19-year-old boy from Ghana’s Eastern Region’s Akim area, has made the country proud by achieving a perfect score in his mid-semester exams.

Amoani received As in all eight of his WASCCE subjects in 2020 but was faced with the fact that his parents could not afford a higher degree.

Amoani’s tale was publicized on internet media sites not long after WAEC revealed the results of the 2020 WASSCE.

The youngster described how he had to go six kilometers from his house in Asuaba to Adeiso SHS every school day.

Amoani’s tale got the attention of President Nana Akufo-Addo, who ordered that he [Amoani] be awarded a complete scholarship for his post-secondary education.

Read Also  "There Is No Single Evidence Of God But Africans Believe It" - [email protected] Activist, Bisi Alimi

Thomas was the only student at Brunel University who received a perfect score in the course Foundation Mathematics for Economics and Finance, according to a narration by Odame Agyare, the gentleman who first interviewed the teenager for his story to go viral and has been following upon him.