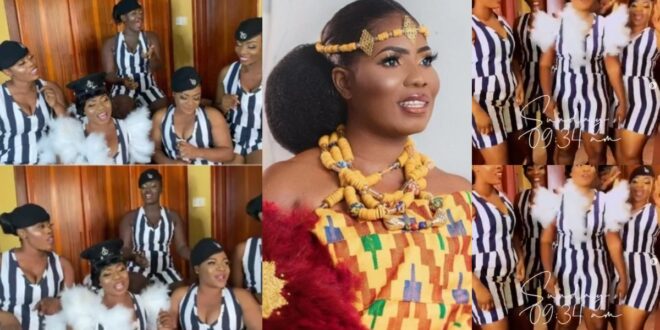 Five female police officers are facing serious charges after uploading a video to social media of themselves and their thrashing bodies.

These five policewomen, who are stationed in the Ahafo Area, were caught in the viral video wearing a beret, according to the police administration.

According to the police administration, the five did not ask approval until wearing the beret, which is against the police code of ethics.

The five constables will have to return to the Pwalugu training school for eight weeks as part of their penalty, according to the document.

Read Also  John Mahama Goes for a bicycle ride to exercise ahead of the December 7th Elections. (video)

They will be fed and educated on SI 48, 87, 88, 91: clauses in the Police Uniform Code, Police Code of Ethics, and the Consequences of the Use of Social Media during these weeks.

The five Police Constables, Diana Kumi, Lydia Adu, Agnes Kyere, Winifred Aboagyewaa, and Barbara Botchway, will be forced to fulfill their daily police duties while at the Police Training School.

A training appraisal report is expected to be sent to the Ghana Police Service Headquarters after their eight weeks of training.