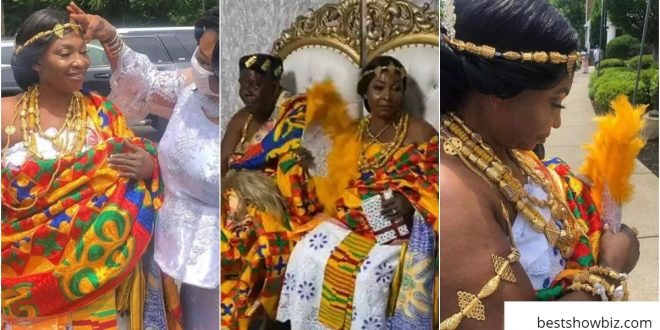 Popular Kumawood actress Kyeiwaa has finally tied the knot in the United States with one Michael Kissi Asare as we reported earlier.

well, it has been questioned by concerned Ghanaians on the man Kyeiwaa has married looking at what she went through in her previous marriage.

it could be recalled that in 2015 Kyeiwaa’s previous marriage came as a big disgrace as the man she married Daniel Akwasi Osei aka America was already married to a woman called Florence Kyei.

with that many people are questioning if this man the man Kyeiwaa has just married is not married already or not.

well, in an interview by a close friend identified as Frank with Zion Felix monitored by Bestshowbiz.com, Kyeiwaa’s current husband Micheal Kissi Asare was single before marrying her.

when asked if the man had children already, Frank claimed he is still finding out and will let us know if there is something like that, but to clear the air, Kyeiwaa hasn’t snatched anyone’s husband.

watch the video of the interview below;