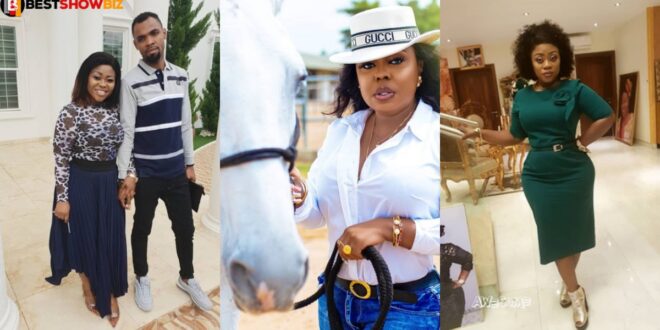 “Your church members are suffering yet you pay rent for your lesb!an partner”- Afia Schwar exposes Obofowaa

Afia Schwar and Ayisha Modi’s fight is still going on. After Schwar roasted Rev. Obofour over his enstoolment, the two controversial characters resumed their feud.

Ayisha Modi, a close friend of Rev. Obofour and his wife, didn’t take Afia Schwarzenegger’s attack lightly and leapt on her to protect the man of God.

They’ve been dirtying themselves on the gram for days, and they’re still going strong.

The unfortunate part is that they’re both dragging innocent people into their battle.

When their church members were in poverty, Osofo Maame Ciara allegedly spent thousands of dollars to cover her lesbian partner’s rent, according to Schwar.

Ayisha Modi and Bofowaa are accused of being lesbian partners. That money was spent on Ayisha Modi by Bofowaa.

Schwar went on to accuse Bofowaa of doing things like traveling to Obegfo’s facilities to mend her butt.

She didn’t spare Rev. Obofour either; she lambasted the man of God, alleging that he borrowed automobiles and hired bloggers to promote him.

Meanwhile, Ayisha Modi has released invoices proving that Bofowaa was continuously sending Schwar money to help support her family while they were pals.

Schwar appears to be biting the hand that fed her.