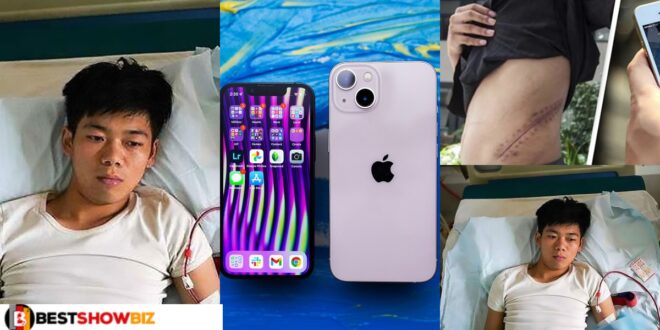 Young Teenage Boy gets bedridden after selling his k!dney for an IPhone

Wang Shangkun, a 25-year-old Chinese man, is now bedridden after trading his kidney for an iPhone on the illicit market for roughly GHS20K

He is claimed to have sold his organ in 2011 in order to purchase the latest Apple devices after asking himself, “Why do I need a second kidney? One is enough?”

He took this decision when he was 17 years old, and now he is linked to a dialysis machine due to renal failure and is likely to remain bedridden.

According to sources, he purchased an iPhone 2 and an iPhone 4, but before to selling his right kidney, he intended to get an iPad 2, but he did not have enough money. He was afterwards approached in an online chat room by an organ harvester.

“When I was on the Internet,” he says, “a kidney agent sent me a message suggesting that selling a kidney may earn me  GHS20K..”

After speaking with the kidney harvester, he underwent illegal surgery in central Hunan province to have his right kidney removed and transferred to an unknown recipient, then returned home with his expensive new Apple products, but later confessed to his mother after she became suspicious.

The illicit procedure involved nine people, however five have now been detained and charged with intentional injury and organ trade.

Wang acquired an infection in his remaining kidney as a result of the procedure being performed in an unhygienic environment, and the lack of post-operative care was assumed to be the cause, resulting in organ failure.

Read Also  "Your first thought in the morning should be... “THANK YOU” - Nadia Buari

His illness has worsened and he is now bedridden, requiring daily dialysis to clear his blood of toxins that his surviving kidney can no longer handle.

Doctors advise Wang Shangkun that he could benefit from his own transplant, but a human kidney can cost  GHS 1.6M on the illegal market, which is more than 80% of what Wang received for his.