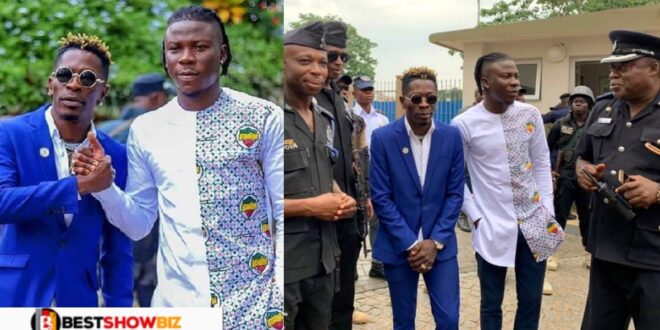 After Shatta Wale was arrested yesterday following his shooting hoax, an outraged SM fan has taken to social media to blast Ghanaian dancehall superstar Stonebwoy for neglecting him.

When Jesus Ahuof3 predicted that Shatta Wale will be shot on the 18th of October, 2021, much like Lucky Dube was shot and k!lled, Shatta Wale pretended to be shot and was brought to an unidentified hospital for treatment on the same date.

Following the prank that was perpetrated, the ‘My Level’ hitmaker was detained and is currently being held in police custody cooperating with the ongoing investigation.

While superstars such as Medika, Fella Makafui, Kwesi Arthur, and a slew of others have called for the release of the dancehall legend, Stonebwoy has chosen to disregard the calls and instead posted a tweet of his interview with Assase Radio, enraging an SM fan who claimed he was a fictitious buddy.

If  Stonebowy’s had been in Shatta Wale position, the SM fan claims that Shatta Wale would have stood with him and supported him.

“See fake friend…. Like ebi u get this case like
@shattawalegh
go support u….. but see your reactions like nothing Dey happen for Ghana…. Take note: He is a fighter…. and surely he will come out….
#FreeShattaWale,” he tweeted