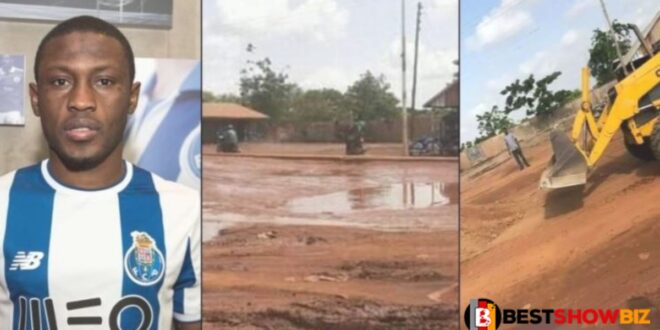 Abdul Majeed Waris is a Ghanaian striker who now represents Strasbourg and the Ghanaian national team.

According to recent news obtained by our organization, the famous Ghanaian striker is funding the grading and asphalting of the main road in Lamashegu, Tamale, after villagers complained about the road’s poor state.

The road connecting Lamashegu, Nyohani, and Sagnarigu has been in a bad state for a long time because the government has refused to work on it, but guess what? The Abdul Majeed Waris Foundation will build the road for the people who have been moaning bitterly about it.

The Warris Foundation used its official Twitter feed to share photos of the road’s ongoing construction with the caption:

Read Also  See What Happened When A Guy Was Found Forcibly Sleeping With A Little Girl.

”As natives and non-natives have bitterly complained about the poor condition of this road, our founder, @warisgh10, is funding the grading of this road in Lamashegu, Tamale, a community where he was born and raised in Ghana’s northern region”