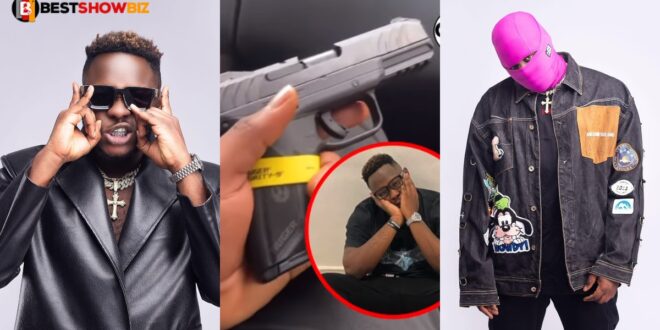 Only a few hours ago, our reputable news portal broke the news of the arrest of Medikal, an AMG-signed rapper.

Some officers from the Ghana Police Service apprehended the rapper for brandishing a gun on social media.

We can not tell if the gun is registered or not right now, and if investigations reveal that it isn’t, his situation could get worse.

The video that landed Medikal in serious trouble has resurfaced on the internet.

Medikal was seen happily flaunting his American-made pistol in the self-made footage to send a message out there that he is not only a thug in his songs but also in real life.

Medikal appears to have recently purchased the weapon and decided to display it to the world, as evidenced by the price tag on the weapon.