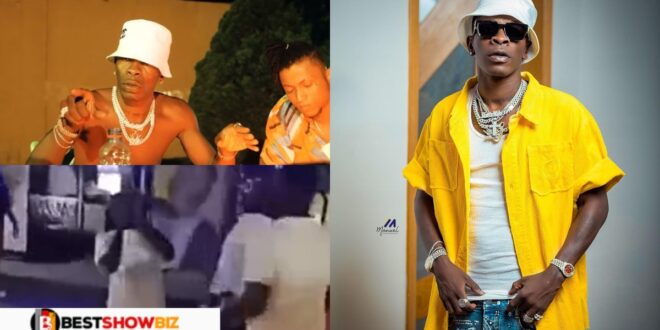 After his court bail and the spiritual cleansing ceremony at the beach on Tuesday, Shatta Wale sobbed like a baby when he finally came home.

After being placed on remand for a few days over their involvement in faking a gun attack, Africa’s most celebrated Dancehall musician and his boys, Nana Dope, Deportee, and Gangee, were released from detention by an Accra Circuit Court.

In response to a notorious prophecy from the Ghanaian prophet, Jesus Ahuofe, who said that Shatta Wale would be fatally shot on October 18, the rapper was apprehended a few days ago for faking a gun attack.

The Court granted them all $100,000 bail after they appeared in court on Tuesday.

Following his arrest the day before, his industry colleague and buddy, Medikal, was also remanded in prison for five days by an Accra Circuit court on Friday, October 22.

Shatta was accused of illegally displaying arms and ammunition and pleaded not guilty.

He screamed to let out a large breath of relief for getting through this successfully, as his family surrounded him when he got home.