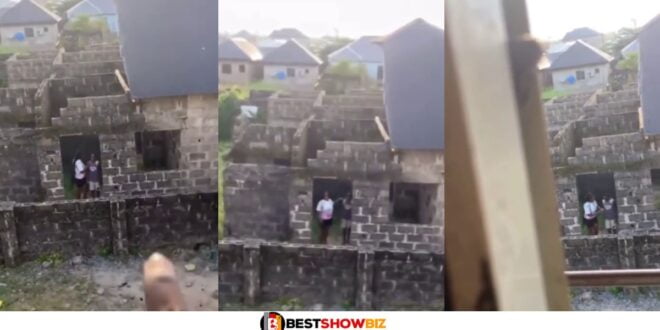 Three young men witnessed a young lady, probably between the ages of 25 and 30, defiling a 12-year-old boy.

If you look closely at the video, you’ll notice that these guys were in their story building when they noticed the woman coming out of an unfinished building with the small boy.

The woman at the entrance looked side by side to see if anyone was nearby, but she didn’t see anyone.

She then told the small boy to take the lead, but the guys said they had seen her and that if they tried to flee, they would chase them down and beat them up.

The lady and the small boy were scared and stood there. The lady was attempting to explain to the guys that the small boy is her junior brother but the guys said she was lying.

In the video, the guys can be heard asking the small boy, “Do you know who she is?” “What age are you?” The young boy stated that he does not know her and that he is 12 years old.

The lady begged the guys not to do anything to her inside the unfinished building, but the guys said they would take them to the small boy’s parents and tell them the story.