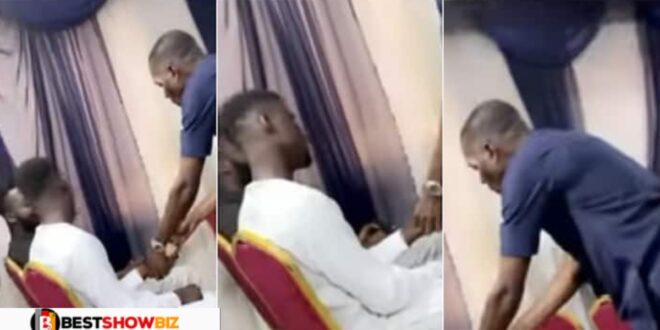 Video: Wahala as two men refuses to give their phones to usher after they were caught pressing it during church service

One of the ushers was taken aback when he realized that two church members were distracted by their mobile devices and attempted to temporarily remove them from the congregation.

The usher could be seen dancing and swaying his body to the rhythm of the melodious tunes being sung in the auditorium while attempting to grab the phone from the church members in the footage that was uploaded on Instagram.

The two, on the other hand, refused to cooperate by clinging to their phones. As they both failed to reach an agreement, a brief drama developed that was devoid of any melee.

The video has elicited a wide range of emotions online, with many varying versions.

We got the video from GosspiMill, who put this caption on it;

“Wahala be like Bicycle!!! Man stands his ground and refuses to give Church Usher his phone, after the usher tried to cease his Phone because he was constantly operating it during Church service!!!”.