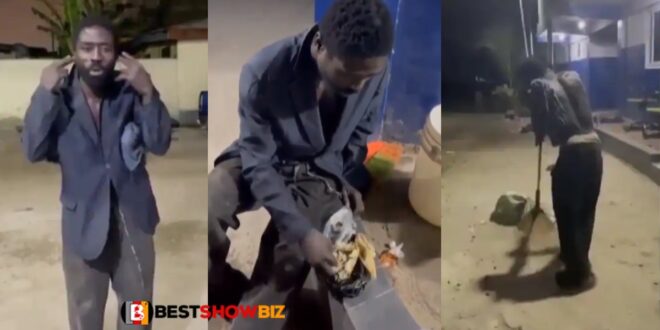 A thief has found himself wanted and freed at the same time after he was discovered stealing electrical wires from one of the offices of a police station in the country.

The young man who was surrounded by several police officers was seen sweeping the station’s grounds in the video.

Another section of the film shows him singing to the cops who were appreciating his performance in a beautiful voice since he claimed he was a musician but came to steal because of hunger.

Following the performance, the man was given some food to eat after doing some laborious sweeping in the middle of the night.

Read Also  Rosemond Brown looks so Good in this Photos

The video revealed the alleged wires he planned to take, with one officer questioning how much he would get if he sold them to scrap merchants.

It is funny but sad at the same time. Watch his video below;