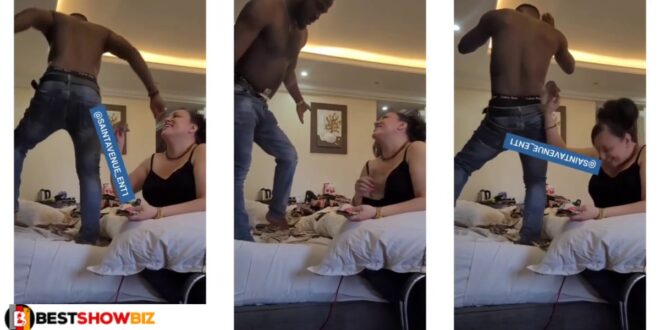 The internet has gone crazy over a video of a man twerking hard to entertain his wife.

In many ways, the video is both amusing and thrilling, as the man, despite being handicapped in one leg, did everything he could to excite his wife, who returned the gesture by throwing wads of dollar bills at him.

The footage, which was posted on Instagram, is still causing a stir and eliciting a barrage of responses from internet users.

‘Green card na your mate,’ ‘this guy used one leg to finish someone’s daughter,’ and other intriguing comments accompanied a video of a man fighting hard for his obroni (white) wife in a foreign country.

Read Also  Video: Lady shows off the huge cucumber she has been using on herself