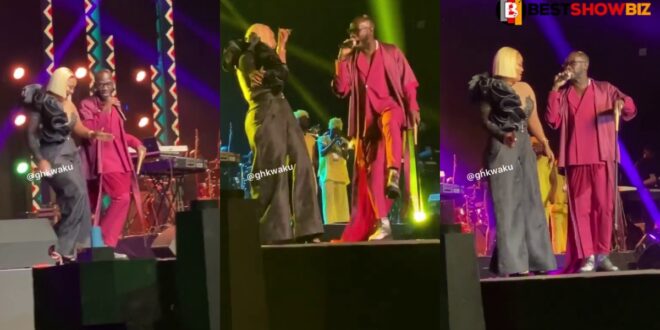 Nana Ama McBrown had invited guests to clap and cheer her on when she chose to join rapper Okyeame Kwame on stage at the 2021 VGMA.

McBrown had been on her feet dancing where she sat while Okyeame Kwame sang some of his classic tunes.

However, captivated by the performance, she started dancing away from her seat and before one could grasp it, she ascended the stage to join her ex-lover.

Okyeame Kwame is said to have dated McBrown for a long time in the early 1990s before they split up.

The two are now married to their respective partners, and all signs indicate that they are still close friends.

Okyeame was full of praise for McBrown as she grooved to his most recent song, Yeeko, according to a previous article by Bestshowbiz.com.

Okyeame himself uploaded the video of McBrown dancing to his song on his Instagram page and added: “Money is sweet”.

The criticism arose after McBrown danced to the song while flaunting her opulent house.