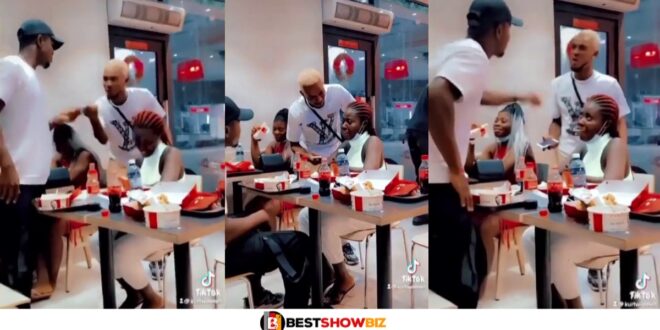 Video: Man Boldly Asks For A Lady’s Phone Number While She Was With Her Boyfriend

It is very rare for a man to ask for a woman’s phone number while her boyfriend is there.

Men like women who are not in a relationship. If you muster this kind of guts and exhibit interest in their spouse in public, some guys will turn the occasion into a fight.

But the young man in your photo got the bravery to ask for the phone number of a lady who was eating with her boyfriend at KFC in Accra.

This young man with grey hair, who was watching the film intently, was seated distant, observing this pair as they eat their supper.

Nobody knows what happened to him, but he immediately stood up and marched directly to this pair.

He greeted them, extended his phone, and asked the lady for her phone number.

The lady was caught on camera giggling as she looked into his boyfriend’s eyes.

This prompted the lady’s boyfriend to rise up and shove the man away, but he was still looking for the lady’s phone number.

The gentleman had intended to take the young man’s phone and throw it away, but it appears he was hanging on to it tightly.

As this scenario was going place, the ladies who captured this video at KFC could be heard giggling excessively.

“In 2022, individuals will use force to grab people’s girlfriends and partners,” one of the females said.