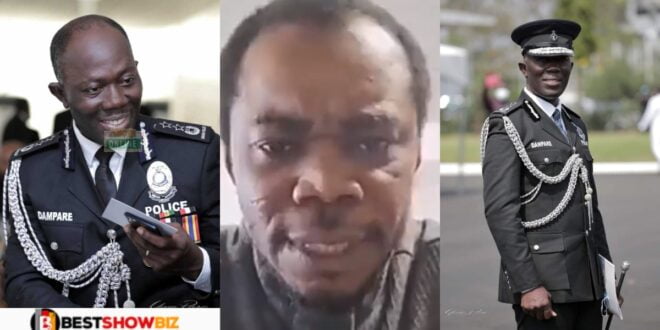 Video: ‘IGP Dampare will be po!soned to death on Christmas’ – Ghanaian prophet reveals

A prophet from the United Kingdom has come out to make a doomsday prediction regarding the Inspector General of Police (IGP), Dr. Akuffo Dampare, claiming that the police chief will be poisoned.

In a video obtained by Bestshowbiz.com, the Prophet identified himself as Reverend Evans and stated that the police inspector’s good deeds would lead to his death.

The self-acclaimed man of God also warned the police officer to be cautious about what he eats because someone was trying to kill him during a Christmas dinner they were having.

He went on to say that he saw the IGP at a Christmas dinner in the spiritual realms when he was poisoned and was instantly sent to the land of the dead where he met Sir John, who told him that he died after being poisoned as well.