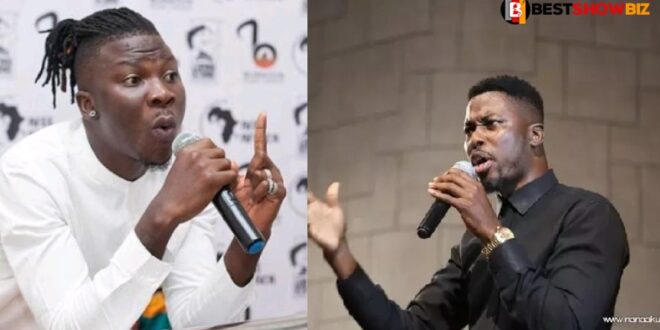 Kwame A Plus, a controversial political activist and social media pundit, has stepped on the toes of African Dancehall legend Stonebwoy.

Stonebwoy has retaliated by launching a scathing attack on A Plus for disparaging his work and making ‘negative’ remarks about him.

According to the political activist, it is not the teenagers on the streets that are participating in illicit mining, but rather politicians and top government officials.

According to A Plus, the BET award-winning singer should not have squandered his efforts on the song’s production because such leaders will not pay attention to it.

Stonebwoy, who was dissatisfied with Kwame A Plus’ public rejection of his idea, retaliated in the only way he knew how.

Stonebwoy highlighted how people like A Plus want to pull him down to please their masters in a coded message he dropped for A Plus on his Snapchat stories, but he keeps winning.

The message, titled “Ventilation,” also stated that Stonebwoy will not lick the boots of evil leaders for personal benefit and will continue to speak out against the rot in society.

Ending his letter, Stonebwoy cautioned A Plus not to try to portray him as a horrible person in front of our lawmakers since he is only acting as a citizen, not a spectator.

Read Also  Man comm!ts su!cide writes in su!cide note that his phone should be given to sandra his girlfriend