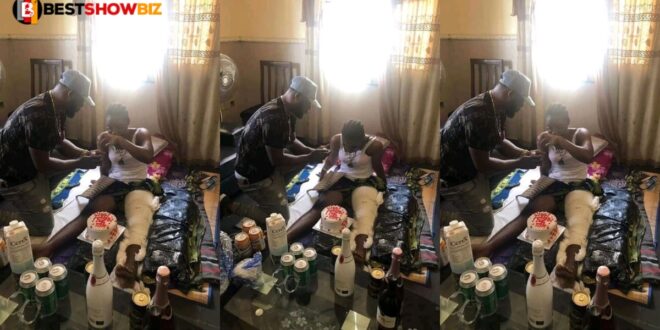 True Love: Man proposes marriage to his bedridden girlfriend after she had an accident

Many social media users have been thrilled by a young man’s proposal to his girlfriend who was involved in an accident. The most unexpected aspect of it all is that he did it while the lady was in her hospital bed.

Love does not depend on a person’s appearance or state, but rather on what the heart entails for each other. Marriage proposals are highly treasured by practically everyone on the earth, particularly by women. They are honored and consider that day to be one of the happiest of their lives.

Many people’s hearts were moved when a young man proposed to his fiancée on her hospital bed. According to reports, the lady has engaged in an accident a few weeks ago that nearly took her life.

Read Also  Video: Actress Ada Ameh breaks down in tears as she visits her daughter's grave a year after her death

She suffers a variety of injuries, the most serious of which is to her leg. Even though her leg may not be the same until she fully recovers, her kindhearted lover did not cease demonstrating her the existence of true love.

While the lady was in her sickbed, the young man went ahead and proposed to her in magnificent style at the hospital. Yes, it surprised her because many guys would have been divided as to whether the lady would walk again or not.

He ignored all of these concerns and proceeded to propose to the lady.

The young lady was spotted sobbing uncontrollably as the man approached her with the biggest surprise of her life. I’m sure she fears she’ll lose the man to another lady if she doesn’t appear the same as before.