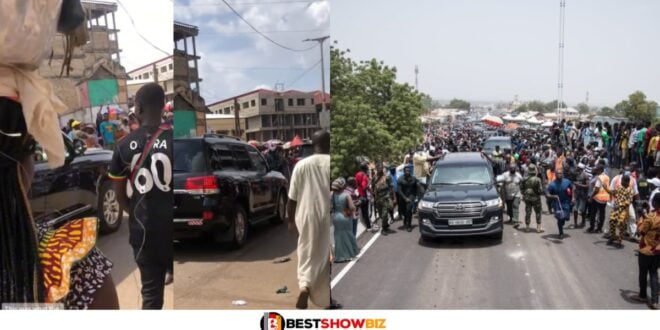 Another video of Ghanaian president Nana Akufo Addo being booed has emerged, as if the first one wasn’t enough.

On Monday, October 17, the Ashanti regional capital of Kumasi played a trick on incumbent President Akufo-Addo, who was there to oversee the Phase II of the Kejetia/Central Market Project. Kumasi was trolling the president.

On their route to the Kumasi Central Market, the president’s convoy was greeted by dozens of merchants at Adum in the central business district who had placed their items for sale. These merchants had set up shop in preparation for the president’s arrival.

As soon as the group of market women, peddlers, and artisans saw the cars carrying the president and other government officials, they didn’t waste any time complaining about how bad the economy is.

Read Also  Meet the real mother of Akuffo-Addo's eldest Daughter, she is beautiful and influential (photos)

This footage emerged a few short weeks after the President was jeered at when speaking at the Global Citizens Festival in Accra.

In better times, the stronghold of the New Patriotic Party, which is in power right now, would welcome the President with open arms. People would wave their hands in approval, and some would even give their clothes to make a carpet for him to walk on if he came to visit.