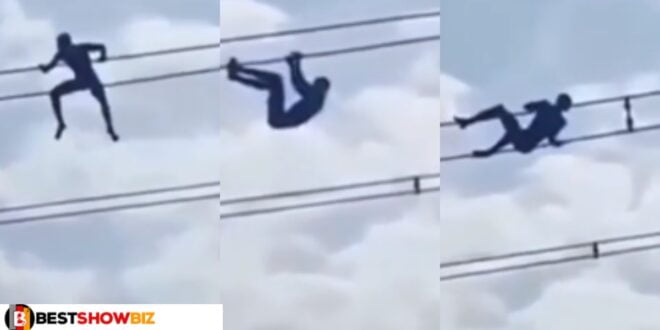 After being pursued by a group of neighborhood boys brandishing deadly weapons, a young man believed to be a thief scaled a power line in order to avoid being beaten. The video we have is of this incident.

According to reports, the man is said to have snatched a phone from someone on the street and taken it with him. After snatching the phone, the ‘Spider Man’ thief was unable to penetrate the throngs of people.

Consequently, the thief, fearing for his life, resorted to the next available means of survival, which was climbing an electric pole and hanging from the electric cables in order to avoid being severely beaten by the youth present.

According to reports, the suspect remained clinging to the power cables until a police officer arrived on the scene to arrest him. We’ve also learned that he was taken into custody and booked into a police station.