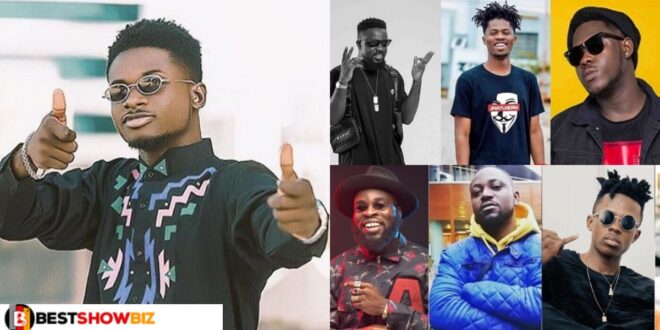 “There is no money in rap Music, all rapper claiming to be rich are just living on fake hype” – Kuami Eugene [Video]

Ghanaian artiste Kuami Eugene claims that the rap music industry is not as lucrative as many people believe.

Rappers, he claims, live and thrive on the attention they receive, but the same cannot be true for the amount of money they make through rapping alone.

In an interview with OnePlay Africa, Kuami Eugene explained that his choice to abandon rapping in favor of singing was based on his personal judgment that rappers do not earn as much as singers.

“There isn’t any money in rapping.” Rappers exist only on the basis of hype. He laughed as he said, “It’s difficult to get money just rapping.”

Meanwhile, Sarkodie is recognized as one of Africa’s most successful rappers, having built a reputation and money for himself by speaking at a rapid pace, throwing punchlines, and rhyming words.

Read Also  "I want my family life to stay out of the public eye, I don't like that"- Akrobeto

Even though rapping is difficult, Sarkodie has managed to get by, despite the fact that he primarily raps in his Twi dialect.

On the other hand, Kuami Eugene is currently Ghana’s hottest artiste and has amassed some fame and fortune for himself.

One might draw a direct comparison between Kuami Eugene and his rap peers and conclude unequivocally that singing pays more than rapping. No?

So, how valid is Kuami Eugene’s argument or observation that rap music is less profitable than other music genres?

More information can be found in the video below.