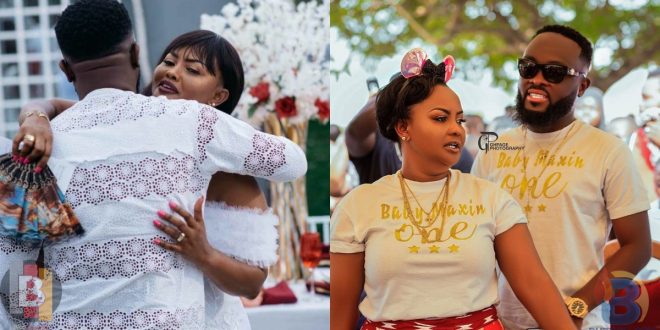 Nana Ama McBrown, born Felicity Ama Agyemang, like any other lady was engaged in a relationship with other men in an attempt to find the best fit for her future. Unlike some other actresses, Nana Ama McBrown’s name does not often pop up in relationship scandals

It is recorded that the actress had been in tree(only) relationship ever since her appearance in the movie industry or her popularity. This is quite strange and is proving that she has good luck when it comes to her relationships as they last long.

We have taken time to gather all the tree great men that happen to be in a relationship with Nana Ama Mcbrown in her quest in finding a perfect husband.

Check them out below:

According to the research, rumors had it that Nana Ama McBrown dated Omar Sheriff Captan.

Omar Sheriff Captan is one of Ghana’s top actors who has starred in numerous movies over the years. In movies, he often plays the character of a lover man or a husband.

Nana Ama McBrown & Okyeame Kwame”, were once in a relationship Somewhere in the ’90s. They made waves with their pictures and public display of love and affection. They were the biggest celebrity couple of their time.

In those days, Okyeame Kwame was the most sought after celebrity. He won Ghana Music Award’s prestigious award category which was Artiste of the year, he achieved notoriety as a member of the ” Akyeame ” group which was later dissolved in 2004

He is said to be a businessman and the last man who dated Nana Ama McBrown till date and the two have been married and blessed with a beautiful daughter, Maxin Mawushi Mensah.

The two are enjuying their marriage with out any problem. We wish them the best of happy marriage til the end of time.

Little about how McBrown made it in the movie Industry

McBrown essentially stumbled into acting by answered an auction call on the radio by Miracle Films and was hired to do costuming instead.

However, on the set, she was able to snag the lead role after the director, Samuel Nyamekye, felt that she was better suited for the role. In 2001, her first movie, That Day, was released launching her career.