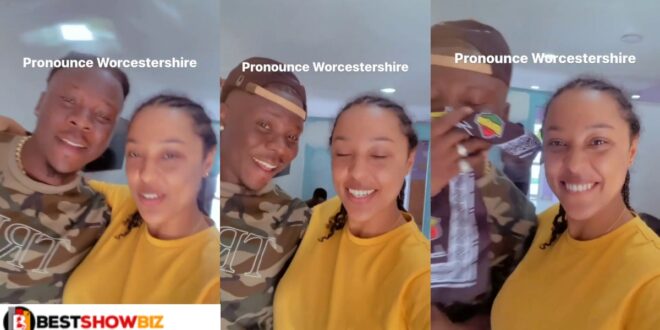 Stonebwoy is at the center of social media trolls after he was unable to correctly pronounce one of America’s cities, ‘Worcestershire.’

The musician was tasked by actress Nikki Samonas to pronounce Worcestershire, but the musician failed miserably.

After Nikki Samonas spelled the word for Stonebwoy to call, it became clear that he would end up making up his own word as he attempted to break the word into the syllabus.

Instead of ‘Wu Stuh Shuh,’ Stonebwoy pronounced the name of the popular American city ‘Wor-ces-ter-shire.’

Unfortunately, Nikki Samonas, who was clearly on a mission to tease the dancehall artiste, was successful in her mission and shared the video online, which is currently trending.

Read Also  Video Young men and women in their 20's having a S£x party at Home hits the internet. (video)

The trolls are having a good time, but it’s all in good fun. We hope Stonebwoy doesn’t take it personally and learns from his error.