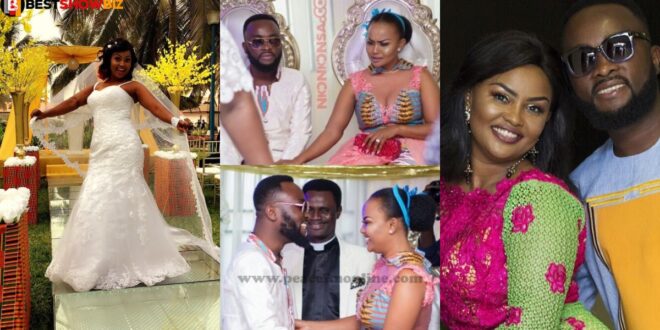 “I am not worried that my wife is older than me, love is what matters”- Maxwell

Many Ghanaians have been led to believe that Nana Ama Mcbrown is ten years older than his husband, Mr. Maxwell Mensah.

On the heels of this widely held belief, Counsellor George Lutterodt recently stated on the radio in one of his contentious submissions that Mr. Maxwell was too young to marry Mcbrown.

He went on to say that Maxwell has a future, but not with the celebrated TV presenter, citing the fact that Nana Ama Mcbrown requires a man her age to handle and care for her.

“I swear to you, that guy (Maxwell Mensah) has a bright future, but not with Nana Ama Mcbrown.” Nana Ama Mcbrown requires someone her own age in order to live a better life.” Counsellor Lutterodt made these remarks during one of his radio rants.

Read Also  Samira Bawumia @ 40 – Top 10 Pictures Of The Most Beautiful 2nd Lady In The History Of Ghana.

Maxwell, known for not being a social media person, has finally responded to Counselor Lutterodt’s claim that his wife is older than him after years of speculation.

Mr. Maxwell stated boldly during a phone-in interview earlier today that he isn’t bothered that his wife is older than him, though he did not reveal the age difference between them.

He said this after the host, Abeiku Santana, asked him, “Is he ever concerned that his wife, Nana Ama Mcbrown, is older than him?”