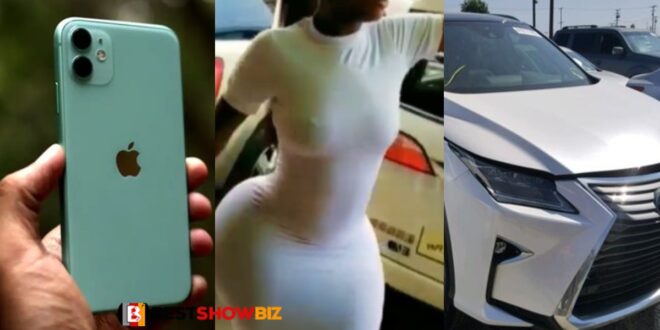 Gossips trending on Twitter highlight the lengths to which modern women are willing to go in order to live a fashionable lifestyle.

Achalugo, a Twitter user, shared the disturbing account of a woman who reportedly slept with 300 guys in order to buy a Lexus RS 2019 and an iPhone, which she eventually did.

The narrator claimed she overheard the lady in question talking on the phone with a friend about her desire and the risks that come with it.

The lady apparently set a goal of sleeping with 300 guys in five months, which she reportedly met, allowing her to enhance her position as a big birl with a large drip.

Read Also  Ghanaian celebrities who were born into rich homes.

She allegedly started after reaching her objective that she would go months without s.ex to allow her body and spirit to recuperate.

”I hate myself for eavesdropping, but this lady told her friend in the lounge that under 5 months she had a Target of 300 men and she fulfilled it, and that’s what got her the Lexus RX 2019 and her iPhone.