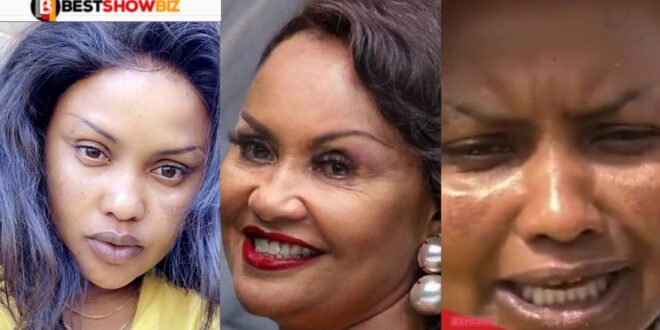 Nana Ama McBrown, a veteran Ghanaian actress, is unquestionably the people’s favorite. The 44-year-old actress has captivated Ghanaians’ hearts as a powerhouse of abilities who has graced our screens for more than two decades.

However, there have been rumors that the film goddess had shaved off several years from her age. Nana Ama McBrown has been on our television screens since the 1990s.

When she was younger, many of the 90s babes considered her as already mature in her acting. It’s therefore remarkable that the actress refuses to age and claims to be 44 years old.

Some Ghanaians and social media users assume McBrown is 50 or close to 50 years old, rather than 44.

As a result, they are constantly on the hunt for evidence that Nana Ama McBrown is older than she appears.

Nana Ama McBrown has apparently caused a stir by sharing a photo of herself. Arguments regarding her age have erupted once more!

Nana Ama McBrown, who is now on tour in Germany, Canada, and the United Kingdom, has uploaded four separate photos.

One of the photographs, interestingly, zoomed up on her feet in her fancy shoes. And, despite the editing, there are marks on her feet that show that her makeup is always working for her.

Fans have been perplexed by wrinkles, varicose veins, and patches on her feet. Our sister appears to have succumbed to the ravages of time.