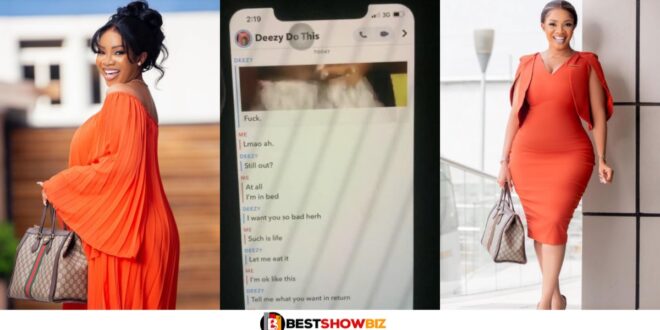 Serwaa Amihere in trouble after defending a man who sent his D!ck photos to a lady on social media

The journalist Serwaa Amihere is currently in the spotlight for all the wrong reasons.

It appeared as though the gentleman known as Deezy was harassing and pleading with the other person to have sexual relations with him.

After that, Kukuaa posted screenshots of their discussion on Twitter, where she called out the gentleman for upsetting her and taking away her tranquility. She was looking for sympathy on the internet.

Examine the screenshots that are provided here.

In a hasty manner, Serwaa Amihere responded to the posts that Kukuaa had shared by requesting that she delete the posts. It was inappropriate, in her opinion, for the woman to broadcast the dialogue on Twitter after having entertained the man on Snapchat, where they had previously communicated.

Even in the face of the guy begging for sex, the chat shouldn’t have been reshared on Twitter, according to Serwaa Amihere, who maintained that it should have remained in their direct messages (DMs).

The tweet posted by Serwaa Amihere incited the ire of internet users, particularly feminists. Feminists are of the opinion that it is imperative to defend the rights of women, and as a result, they voiced their dissatisfaction with the fact that Serwaa Amihere was not advocating for this cause, But rather requesting the young lady to stay quiet about the unwanted approaches made toward her by the thirsty male online and to keep quiet about them.

Read Also  "I Must admit, i don't like wearing bra and pant!es"- Slay queen reveals as she shares photos.

As a direct consequence of this, Serwaa Amihgere has been blasted multiple times. Have a look at some of the comments down below…

This is what she wrote:

Take a look at the screenshots that detail the entirety of the sexually harassing discussion that took place on Snapchat between Deezy and Kukuaa.