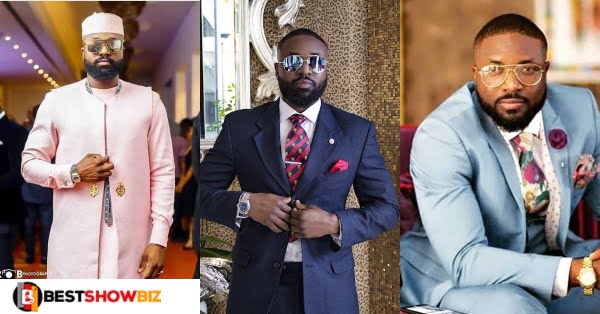 Many people were taken aback by his marriage to a younger woman, as they were under the impression that he was only interested in older ladies.

He first publicly dated an older lady after meeting her while competing in Big Brother Africa with his ex-wife Pokello, who is also a reality television star.

They were married for a while and had a kid together, but their love did not continue and they filed for divorce.

Elikem went on to date a much older woman, who happened to be a Zimbabwean businesswoman known as Queen Dee, who occurred to be the mother of his child.

According to reports, Queen Dee was one of his largest spenders, and she generously supported his shop and other businesses with a large sum of money.

Elikem appears to enjoy the carefree life of a baby boy and desires to be taken care of, therefore he will choose a wealthier older woman over a younger one.

In an episode of Joselyn Dumas’ YouTube show, Keeping It Real With Joselyn, he stated why he had a thing for older ladies.

His reasoning was that he appreciates the maturity they bring to the table rather than the money per se, but that older women are more in tune with their desires when compared to younger ones.

His romance with Queen Dee, on the other hand, did not continue quite as long. We are baffled as to why it did not last…at least for the time being.

In one of his workplace conversations, an intern revealed that he was seeing a younger woman and that they were surprised to see him with her.

They stated that Elikem prefers his women to be older and wealthier, whereas this girl seemed to be the polar opposite of that.

Although he is on the younger side, he appears to be enjoying himself because the puppy love between him and his wife is a delightful sight to behold!

He seemed to be deeply in love with his wife and to be thoroughly enjoying every moment of their marriage.

They have a lovely newborn boy who appears to be perpetually sleeping and unconcerned about anything else in the world.

Perhaps his choices have shifted, or perhaps he has simply discovered the one, and he is unable to articulate exactly why he is drawn to her, but he is.

They are reported to be models, and they appear to be in great shape together. Hopefully, this is the last one and they will be pleased for as long as they can stand it.

Here’s a look at the highlights of his love life: