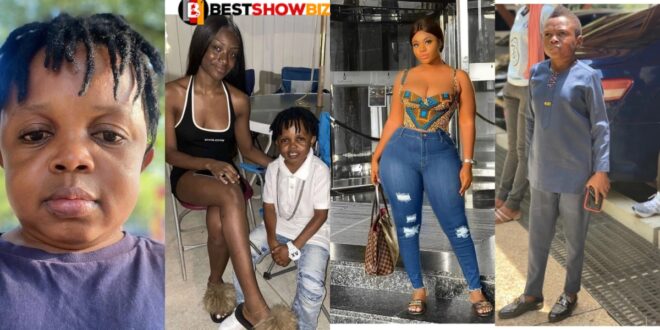 Samuel Dabo and his good-looking pal Don Little are both experienced Kumawood performers with a long history in the field.

Both actors are extremely gifted, and their fans are really proud of them. With their distinct comedy skills, Yaw Dabo and his attractive pals have been causing confusion online.

In local films, the performers are often seen as obstinate boys. When they are on set, they have a strong desire to perform, and they are always entertaining.

They also have the confidence to play their parts convincingly in any production and connect with their audiences.

They consistently inspire their audiences in their films, and they are among the country’s finest actors.

The two attractive actors are rumored to be dating two attractive young females. I will show you a few images of these lovely females in this article.

Vivian Okyere is a fashionable Ghanaian actress who also happens to be one of the most gorgeous in Kumawood.

She has been causing confusion with her attractiveness and curvy body all over the internet. She is rumored to be Samuel Dabo’s girlfriend.

There is not much information on Don Little’s supposed girlfriend, but the two have been photographed together multiple times and appear to be a perfect match.

Don Little is a highly attractive actor who is also quite humble. Don Little and his alleged girlfriend are shown in the photos below.

Popularly known as the webmazta; Cobby Collins is an established web designer, a computer instructor, and content creator. You can contact him via email cobbycoll[email protected] or via Whatsapp only on +233204875306