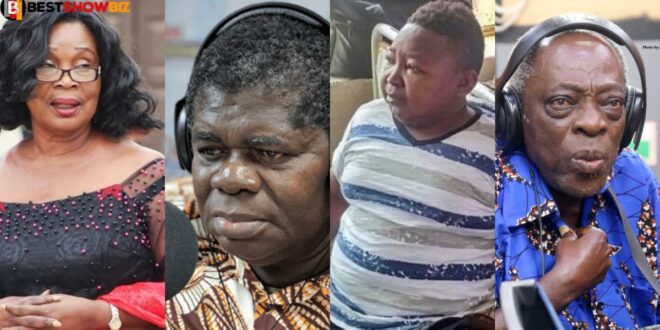 After living flashy lifestyles in their prime, the tale has always been the same for Ghanaian superstars in their retirement years.

As a result, they all return to Ghana to beg for financial assistance, despite the fact that they had their hay days alone with their families, girlfriends, and side-chicks during their earlier years.

But, fortunately for them, whenever their deteriorating conditions are caught and distributed in the media sphere, they attract the notice of some government officials who are willing to give a helping hand.

As a result, this publication aims to shed light on some of the Ghanaian veterans whose plight drew the attention of policymakers.

Psalm Adjeytefio receives a donation from Bawumia and Henry Quartey.

The actor’s rent for the next five years is scheduled to be covered by GH30,000 of the money, with the remaining GH20,000 going toward his upkeep.

Ewurama Badu, Kohwe, and Wayoosi are among those who have benefited from donations made by former President Mahama.

Former President John Dramani Mahama made a donation to veterans in the Ghanaian music and film industries in 2016. The supplies included food and cash, and they were given to them sometime in 2016.

Ms. Barbara Oteng Gyasi, the former tourism minister of Ghana, called on the actress Grace Nortey, widely known as “Maame Dokono,” and actor Emmanuel Armah in April 2020 and presented them with certain goods supplied by the previous minister.